They Came to Nashville

UPDATE:  Marshall Chapman has a new record out next week, Blaze of Glory!  Check out the world premiere of one of the tracks here.  This interview from a few years ago was about her last record, Big Lonesome.

Author’s Notes: I’m really trying not to be a giggling schoolgirl when I interview some of my own heroes (see the Kevn Kinney interview), but my conversation with the gracious Marshall Chapman highlights my own excitement when chatting with people I have loved for years. Like a chameleon’s colors, my accent emerges when surrounded by other Southerners, without my control.  I did not notice how significantly I do this until I produced this interview.  Bless my heart

Everybody in South Carolina knows Marshall Chapman, even if they don’t. While she left for Vanderbilt in the 1960’s and basically never returned to reside in the Palmetto State, her hometown of Spartanburg continues to celebrate the free spirit who “made it” in Nashville, although they would likely talk behind her back, given her history.  Some boxes are just too confining.

Leave it to Chapman to release a book, an album

in the same year.  As she says, most musicians of her experience began “phoning it in” years before.  Her album emerged out of the grief over the death (she hates the word “passing” because it reminds her of gas–it’s okay to laugh) of her dear friend and frequent co-writer, Tim Krekel

.  Big Lonesome became Chapman’s love letter to a departed friend.  When asked if she wishes she had interviewed him for the book, she starts to answer affirmatively, then stops, and says, “No, Tim was really Louisville (LOO-uh-vle), not Nashville.  He lived here for a while, but he wasn’t Nashville.”

(who has possibly the funniest story I’ve ever heard about creative energy needing to find an outlet), to the long list of “old Texas guys” that Marshall Chapman cites as her influences (like Willie Nelson

).  If you have never read Chapman’s essays in Garden and Gun

magazine or her first book

, you are missing a gem of Southern humor and precision.  She asked each songwriter the same six questions, and includes the “incidentals” like Emmy Lou Harris’

dogs jumping on the tape recorder and her mama shuffling through the room with her walker, bringing the reader into the conversation like a peer.  Contrasting sweet insight with raucous happenstance and her own real-life travails, Chapman writes the perfect “beach book” that even those who do not care for country music will adore.

and the ambient music of Hayes Carll.  While comfortable on stage with a guitar, bringing performance energy to a scene on film proved to be a different creative demand.  Chapman marvels at how the actors (she does not consider herself an actor) exude the light that makes them stars (summary of her words), while they showed that the “real” performance in front of a live audience was terrifying.  Marshall Chapman is many things, and she is absolutely real.

Songs in Episode 1115 include: 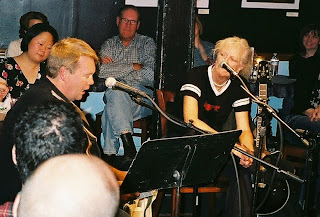